1 reply to this topic

Scalpers are everywhere. What a pity for fans!!


Kiwi Celine Dion fans are shocked and upset after tickets to her Auckland shows seemed to sell out straight away, with scalpers quickly advertising tickets on resale websites for hundreds and even thousands of dollars extra.

The 'My Heart Will Go On' singer is coming to Auckland for two shows in August this year. Pre-sale tickets sold out earlier this month, so many Dion fans were eagerly awaiting general ticket sales, which launched at midday today.

However, many were deeply disappointed when they went to purchase and were notified that tickets were immediately unavailable.
One Motueka woman was left particularly heartbroken after trying to buy tickets to surprise her mother.

Kat Bradley told Newshub she and her sister had already booked flights and a hotel to for the surprise trip, and were waiting on the site from before midday, ready to purchase concert tickets.

"We saved up to buy certain tickets because it was Celine. I've been dreaming about this day for so long. "
Ms Bradley went to see if she could purchase any from re-sale websites, and was shocked at hike in cost.

Many commenters on the event's Facebook page have expressed similar disappointment.


"To those who bought tickets and are now selling them for insane prices on Resales: you are just being inconsiderate and selfish. It's so upsetting that so many genuine fans may miss out now," one fan wrote.

"WTF!!!!! I have sat here for an hour since 12 on the dot even put time aside for this out of my day. Its sold out before they even went on sale???," another said.

Anne Changaiya posted on Twitter asking Celine Dion herself for prices to be dropped.

"It's looking like [only] the rich can go to your concert here in Auckland," she wrote, posting a screenshot of four tickets being sold by a scalper for over $25,000.

Frontier Touring spokesman Brent Eccles told Newshub the speed of sell-out was simply due to crazy demand, the likes of which he's never seen before. He says there were tickets for all seating sections for the show available at midday when they went on sale.

He agreed re-sale sites are a "real problem" in the industry, and says they've been "lobbying the government for a while".

"It's becoming a problem where we can't control the sale of our own tickets," Mr Eccles says.

"We put measures in place for that not to happen, but there are lots of unscrupulous people out there with sophisticated technology who take advantage of it."

He says he would love to think action might be put in place after today's social media uproar.

"It's been going on for a number of years now and nobody is taking it seriously."

Dion performs at Auckland's Spark Arena on August 11 and 12. 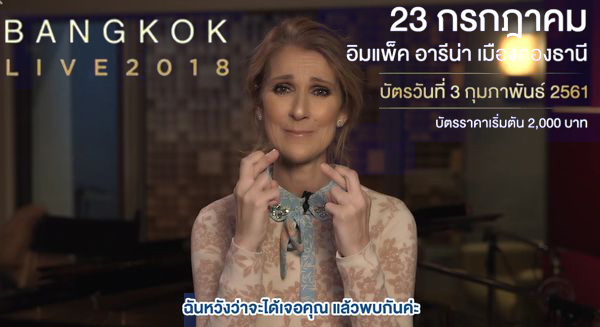 
This topic has been visited by 17 user(s)