62 replies to this topic - The Making of the World Children's Day Anthem

- A Behind-the-Scenes look at the telecast

Celine Dion and Josh Groban in a rare performance of "The Prayer", plus . . ."Maybe" by Enrique Igelsias, "Hits Medley" by Peter Cetera, "Help Me" by Nick Carter, "Spiderman" by Michael Buble, "I Believe I Can Fly" by Yolanda Adams, "Winter Games" by David Foster, and "Somewhere Over the Rainbow" by Nita Whitaker.


This Primetime Emmy® award-winning 2.5 hour concert DVD is mastered in cinematic high-definition progressive video with Dolby® Digital 5.1 Surround Sound. It contains 19 songs from 11 artists, including music, performances, and footage exclusive to this concert DVD not found anywhere else in the world. Bonus Materials include: The Making of the World Children's Day Anthem, a David Foster Anthem Solo, a Behind-the-Scenes look at the telecast, Celine Dion & Nick Carter Visit a Ronald McDonald House, Artist Bios & Photos and the Trailer.


Every November 20th, thousands of participating McDonald's® restaurants in more than 100 countries worldwide team up for World Children's Day (WCD) to host an unprecedented simultaneous event for children in their communities. This annual, global fundraiser benefits Ronald McDonald House Charities® (RMHC®) and local children's causes. World Children's Day is one of the largest global corporate philanthropic efforts of all time, raising millions of dollars and benefiting millions of children through medical, educational, financial and artistic assistance.


The concert DVD was produced in 24p High-Definition Television (HDTV), 16:9 widescreen, and Dolby® Digital 5.1 Surround Sound. It's believed to be the world's first entertainment TV special to be shot, mastered and edited in High-Definition 24-frame progressive scan. It's a wonderful addition to any home entertainment system.

Hosted by David Foster, the Concert for World Children's Day aired primetime on ABC Nov. 14, 2002, but what network TV was able to fit in one hour pales compared with the full-length (nearly three hours) spectacle released on DVD (and VHS) as a fundraiser for the charity, which raises money for Ronald McDonald House Charities® nationwide.

Nineteen songs are performed by a wonderful variety of talented vocalists, including Celine Dion, Enrique Iglesias, Josh Groban, Yolanda Adams, Nick Carter, Peter Cetera (who doesn't even appear in the TV version), and a handful of burgeoning unknowns that Foster chose to showcase such as Michael Buble. He also debuts his World Children's Day anthem, "Aren't They All Our Children," the kind of misty, over-the-top ensemble piece that has become obligatory at these kinds of affairs.

Heaps of bonus material run alongside, including visits to Ronald McDonald Houses by Dion and Carter, a making-of-the-anthem feature, behind-the-scenes footage, and plenty of information about the cause and participants. For those who saw the telecast and want a memento, this DVD (or VHS) offers quite a bang for $20, and all for a good cause, too. -CT


Among the accolades bestowed on the production of The Concert for World Children's Day, produced by Executive Visions Inc., is a Primetime Emmy® for Outstanding Music and Lyrics for the World Children's Day Anthem from The Academy of Television Arts and Sciences. Song Title: Aren't They All Our Children, Music by David Foster, Lyrics by Linda Thompson. Awarded at the 55th Annual Primetime Emmy Awards on September 13, 2003, the renowned songwriting team composed the anthem as the creative centerpiece of the concert. The song was showcased as the grand finale of the star-studded entertainment television special that aired in November 2002 on ABC Television.


The International Recording Media Association (IRMA) recognized EVI for The Concert for World Children's Day DVD at its 5th Annual DVD Awards, hosted by Leonard Maltin. Nominated for "Best DVD-Audio" and "Best DVD-Video Music," the IRMA awards are recognized by the Hollywood community as the most prestigious awards in the DVD industry and celebrate the art and science of creating DVD titles.

Aren't They All Our Children Anthem - David Foster and Cast

Thank you so much for the good news~

Is this real hd? 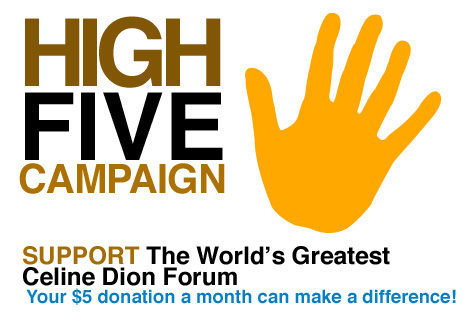 According to the file size. It can't be real HD.

Remember her name because you never forget her voice ♥ Thank you, Céline for giving me the greatest birthday I could ask for! ♥

Angel of My World

Wow! just a fantastic concert and beautiful song written by David Foster and greatly sung by such amazing singers. Hey thanks. I love

But there are only 2 songs. Where are others?


This topic has been visited by 28 user(s)