45 replies to this topic

I arrived home yesterday - slept for 24 hours and now I'm at work and for some odd reason, all the lights seem WAY too bright

I had an unbelievable week


Of course it was depressing to leave Las Vegas but even more so because they took down most of the Celine posters....

What do you say to taking chances?

That is just sad to see


All of the promises broken..
And all of the songs left unsung...
Seem so far away as I make my way back to you.
You gave me faith and you gave me a world to believe in

I'm a hopeless photographer so please excuse the fuzzy ones

Oh Jane, so said to see that Bette is plastered everywhere already. I'm glad I didn't stick around to see that! I wonder what they did with all the Celine posters? I would have loved to have the huge one that was right next to the box office

I'm a twin mommy just like Celine!
Sophia and Anthony arrived on December 28, 2010

Elaine and I after the final show...

Mathias, Suzanne and Sofa at the Hoover Dam

The Colosseum during the day

The Colosseum at night I went to the strip yesterday, and under the sign that now shows Bette Midler, they are showing a Celine sign saying " Thank you Celine for reinventing Las Vegas entertainment" I have pictures, so as soon as I can I'll post them!!!

Hey Jane!!
It was great meeting you out in Vegas, the group tour was a lot of fun.  Thanks for putting that
together.  Wow, what a week it was huh?  Sooo emotional, I still don't have all my thoughts together
from those 4 shows and everything that went on.  I'm so glad I was there.

Thanks for the pics Jane. Sorry again for having missed you in Vegas, but hopefully we might organize some other big Celine get-together in the future and more of us will get to meet all of you!! T.

Got an X and an O from Céline! *mwah*

OMG, they have THAT sign up already..??  What... next you're gonna tell me they've already cleared her boutique??  UGH!!

Guess it won't be long before they are tearing up the stage and redoing the now famous and soon to be gone 5+ degree-angled stage that Céline sang and danced on.... in high heels.... BACKWARDS!!

"Once touched by pain, you're not the same.  But time can heal, your heart again.  So let the clouds... that bring you down... just fade away... away"

I had such a blast with you in Vegas.

You make me proud to spell your name W-O-M-A-N!


And, Elaine, my dear - it's soooo good to hear from you. You are one of the sweetest people ever!

I have things to say about you gals in my next posts in my thread!

nice pic!! too bad.. i wasn't in the group ahhahaha 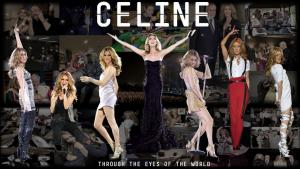 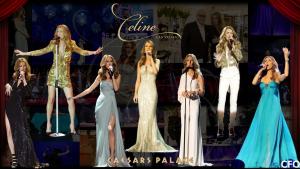 i agree it kind if stings a bit.

Wednesday night at Slice after the show:

First you see Sophie waving and then sitting. Then I zoom in to the back of Yves Frulla

Then you see Kevin (ks1981) waving. Michael (idroveallnight)  is the one standing and wearing glasses. Then you see Antoinette and Alanna go nuts

The longs queues going into the Colosseum.....
It was already 8:30pm

Fans gathering after the show to get pics with the band and dancers:

thanks for the pics Jane! I'll never forget anything from this week. I'll NEVER forget Vegas. those 5 years of A New Day were amazing and I made lots of friends who will stay in my life forever!!!!! Oh mon dieu.... just now I'm able to talk about it because before I couldn't say a word without crying.

Ahhh the memories.  I will never forget those moments.  Celine sure knows how to bring people together.

But it all wouldn't have been possible without you Jane.

And Elaine, don't worry, those pictures of Garou are coming soon.

ahhh the memories of a wonderful week ...

I was dreaming in Vegas that time!

I know celine dion from my friend He,and I find I love dion most!

thanks for sharing the pictures.

Videos from inside the Boutique:


Video of box office, colosseum entrance and boutique:
I took this for the fans who couldn't make it to Vegas so you could get a feel of what it was like to be there.

You gotta love this guy

All of your photos are great! I will upload them too in the next couple of days! I'm so glad I got to take pics with all the members of the band and with one of the dancers, the one with the white paint on his face in the show, he was so cute!

I made a photo of my friend with Luc Plamondon too and she got an autograph from Garou at the last show, she was very proud

We went to the last two shows, they were so amazing, she sang better than on the DVD. I'm not gonna go on an on about them, many of you were there, you know how amazing she was.
It was kindda sad to see all the big billboards removed.... I was glad to see that video with Thank you Celine.... We got that on video. And also they run an ad for her perfumes on the screen at the box office, we recorded that too. Videos after Christmas, they're on my Raluca's camera and she's away until the 26th.
This was the best holiday. My 4th and 5th time seeing Celine and the first time I'm part of an important moment in her career.
I was reading online press reviews and stuff, and everybody aknoledges what she did in Vegas, her amazing accomplishments, it's nice to read nice stuff about her.
And how cute is RC???

He's even cuter in real life. That image of Celine hugging him on stage and kissing and hugging Rene too will forever be in my mind, she was so lost in those hugs, I could feel their love filling up the Colosseum.

He was so cute picking up all those rose petals for his mommy.

I'm gonna shut up now, cause I could probably talk about these 8 days I spent in Vegas and the last two shows until May when I'll see her again in Paris

Hope everyone had a magical time!
There was only one thing that pissed me off at the last concert. Of course, we were standing up, clapping and dancing and everything, and there was a couple behind us and one point the guy pulled my arm to sit down. I think I gave him the "leave the hell alone, this is a concert" look, and after a couple of minutes an usher came to us and told us to sit down. I can't believe that happened and at the last concert. People like that piss me off. I wanted to give him a piece of my mind but  I decided he was not worthing losing any second of Celine. I can't understand people sitting down at concerts, especially during uptempo songs and then making others suffer cause they're too lazy to get up.
On the other hand, on the 14th I was sitting just behind Ramona and the other girl (sorry forgot your name), and that entire area was filled with real fans and we stood up and danced and stuff and it was great. I wanted to start talking to you girls, but I think I'm socially handicaped or something I'm too shy

But I had a great time being in the area. O the 15th, right next to us there was a really nice couple, both seemed big fans, the guy kept whisling all along the show, and Raluca was too, there was a whisling contest on both sides of me

PS: Just cause I'm curious, what happened with the glow sticks and singing a song for her? I did sing "Celine c'est a ton tour de te laisser parler d'amour", but I thought we were supposed to sing "These Are Special Times". Anyway, it was amazing!

i am glad that you had a great time. did you buy anything from the boutique?

I have a pic of the nice thank you to Celine but the file is too big --- Help!

Gah...how depressing, I'm not coping to well being home from Vegas and it all just being OVER...ughh

Nice pics Jane...I wish we could have met while I was there!  I was so looking forward to it, and then just like that..you busted my bubble!

Just Kidding, hopefully we can meet up some other time in the future!

Jane, what happened to the dinner for 12/15.  Erwin went and said he couldn't find anyone at the TI Buffet.  I was feeling sick that day, so I didn't make it.


This topic has been visited by 2 user(s)